Daryl and Dale have already blogged about our viewing of the Great American Solar Eclipse 2017, but I want to add my recap.

After I left Glacier National Park a couple weeks ago, I was having trouble finding cool campgrounds with good cell signal. Coupled with smoke from over 500 wildfires in British Columbia and the northwestern U.S., I was starting to get discouraged and ready to head home. I've been on the road for almost 9 weeks, and I am done; ready for my comfortable house, bed, shower and TV. Besides, I was getting bored and lonely and wanted family and city. But there was one thing remaining that kept me from making a beeline south, and that was the solar eclipse.

Daryl was the first of us to make plans to travel to Idaho to see the eclipse, and when I heard he would be heading to Boise where Robin and Ken lived, I jumped on board. My summer plans of going to northwestern Montana after dropping the boys off would be convenient to making my way back down to the path of totality by August 21. Earlier this summer, Dale also began to think he would likely be far enough south to join us. And that's what we did.

As I wrote in my last post, I spent 2 weeks leading up to the eclipse in French Creek Campground, and Dale arrived on the 17th. He and I drove south of our campground scoping out possibilities for viewing, and making many contingency plans if traffic was dense that morning. When Daryl and Gisele arrived, we also took another drive south of Lake Cascade all the way to Cabarton and across the Payette River. We found a great spot, and hoped for the best on Monday morning.

As it turned out, our prime spot was open and waiting for us when we got there at about 9:30 a.m. We set up our lawn chairs, and sat back with our solar glasses to wait for the astronomical performance. The skies did not disappoint. 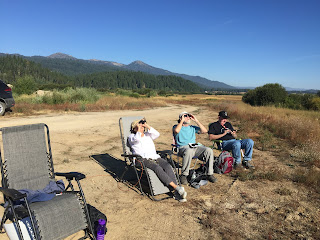 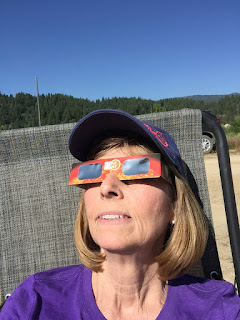 Describing a total solar eclipse is difficult to do. I came up with these three terms: Wow, Oh My Goodness, and Awesome!! I'm glad I turned my iPhone video on to try to capture it. The quality is terrible, but you can hear our excitement as the sky grew dark, the air grew cold and the moon's shadow overtook the sun. I thought the light/dark effect was as if a big black bowl was being placed over us, but not quite touching down to the horizon. If we looked up, it was as dark as night, with stars visible. But if we looked down around the earth, it was twilight for 360° around us, as if someone had left a gap at the rim of the bowl.

Many people have said they enjoyed the partial eclipse and felt like they had a great experience. But one reporter accurately opined, "The difference between a partial eclipse and a total eclipse is like the difference between a lightning bug and lightning." As we watched the crescent of sun become smaller and smaller, the difference in illumination was startling. Even the smallest sliver of sunshine was enough to give a soft glow to the entire sky and area all around us. But the light switch was turned off at the moment of totality.

And the corona! That was the star of the show. The black orb surrounded by the ring of beautiful light dancing outward was so surreal, it was almost as if we were watching something created by CGI. Except it was much more magnificent than anything I have ever seen on screen.

All too quickly, a piercing dot of light shone through and the totality was over. Our heartbeats began  to slow, and our conversation picked up, and we sat back down in our lawn chairs to contemplate what we had just experienced. We stayed through the end of the credits, packing up our chairs as just the tiniest little speck of shadow was creeping away from the face of the sun. We drove into Cascade and had lunch at a pizza joint, before heading back to our campground.

They say once you have experienced a total solar eclipse, you understand why people race all over the globe to try to see every one. We four vowed to make every effort to be in the path of totality in 2024, and I know many of our family members will be there with us. How about you? 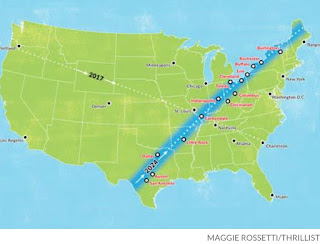