I did indeed dump at the Ranger Station (family privileges - it pays to know someone who knows someone...), then Dianna and I drove over to Blue Ridge Campground in her car to select a space. The campground was totally empty except for the camp host, and I had my pick of the entire litter (of spaces). I chose the best one, a back-in spot with plenty of trees which also happened to be right next to the camp host. I figured the campground would fill up anyway, so no point in choosing an isolated space. Besides, Richard had already met her and found out she was a teacher at our alma mater, Flowing Wells High School. I knew we could be fine neighbors, and I was right. We became good friends as the week wore on. 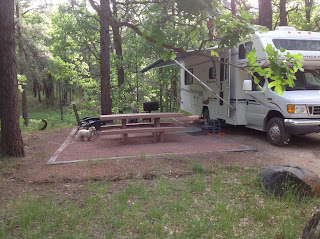 A hot, dusty walk back to the Ranger Station to pick up my Minnie was almost the un-doing for Hanna and me. We were already pretty tired from packing up, running around in Payson and the drive north, so the 1.3 miles seemed like 3.1 miles. Dianna and I brought Minnie to the campground, got backed in and set up. Dianna went back home, and I took a quick shower and a nap. A couple hours later, I felt like a new woman.

Richard and Dianna invited me to join them for dinner of BBQ ribs, salads and beans, and even picked me up so I didn't have to walk the dusty trail again.The ribs were leftovers from the Hot Shot fire crews who were fighting forest fires in the Coconino, and they were delicious! (The ribs, not the fire fighters. Although if I'd seen any of them, I might have thought they were delicious, too. ;) ) When they brought me "home", we sat outside for a while chatting. It was a beautiful evening.

On Thursday morning, they picked up Hanna and me for a day of 4-wheel adventuring, exploring the back woods of the southern Coconino Forest. We visited several historical and abandoned cabins, stopped at pullouts and overlooks, climbed* Moqui Lookout fire tower, discovered a few developed and dispersed campgrounds, and drove to beautiful Knoll Lake. We were out for nearly seven hours, stopping for a picnic lunch and to look for fiddlehead ferns along the way. I think we were all satiated and tired by the end of the day, and I tucked into my Minnie for dinner, reading and bed. 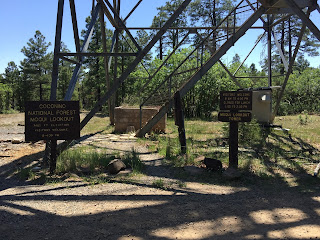 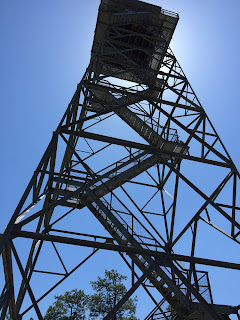 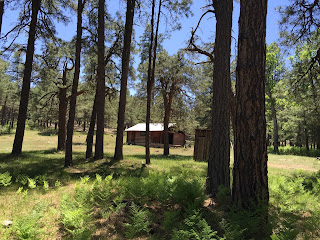 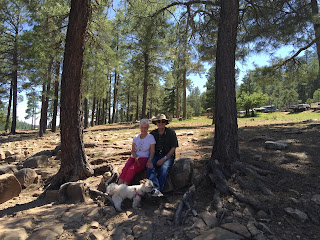 On Friday morning, just as I was getting onto the Arizona Trail for a trek to the Ranger Station, the campground host stopped me to warn me a bear had been spotted in the area, headed toward us. I gave it a few minutes thought, and trudged on, talking out loud all the way. I made it safely, and spent the morning getting a guided tour of the Blue Ridge compound. Richard brought me home at lunch time, and I embraced "retirement lifestyle" all afternoon out in my recliner lawn chair with a good book.

At 6:00 p.m. Richard and Dianna picked me up and we drove down to the cafe at Clint's Well for all-you-can-eat fish fry. A thunderstorm moved in while we ate, and by the time we got back to the campground, the rain was really coming down. I spent the coziest night imaginable with the rain tapping on the roof while curled up in my big bed under the comforter reading for a while, then watching videos.

Saturday dawned cool, crisp and clean; perfect weather for packing up and heading back down the mountain. I pulled into Mesa just before noon.

I have a few things to attend to at home for the remainder of the month, but hope to be back on the road heading north by early July. Since Dale's Alaska plans have pretty much been squashed with the delay in getting his Honda fixed, he just may join up with me for a bit of my sojourn to the Pacific Northwest. Like good retirees, we will remain flexible with our plans and build in some opportunities to do our own thing, but I sure wouldn't mind his company and expertise for some of my trip.

Until then, see you down the road.