I took a three day trip this week in my Minnie. Dale is camped up near Cottonwood, and I decided to drive up and join him for a few days before he heads north to Alaska this summer.

I haven't had my Minnie out of the back yard since November when I went to Roosevelt Lake, and it had gathered a lot of dust, especially on the windshield. I hosed off the front of the truck and washed the windows with Windex, but one of these days I need to get a real full-coach wash.

I managed to back out through the gate by myself with no trouble. It took twice pulling forward and back to get positioned right on the ramps over the curb, but I also did it all by myself without gouging out too much of the road asphalt. That was a great feeling.

I got the tires aired up at Discount Tire (all 6 were about 20 pounds low), filled up with gas, and propane. I got my first ding (okay, more like a crunch) pulling away from the propane pump when I turned a bit too soon and bumped the rear fender on a post. I've known several folks who have done that once, and hopefully this is the one and only time it will happen to me! Lesson learned.

I drove up to where Dale had staked out a place for our two rigs and  got set up. 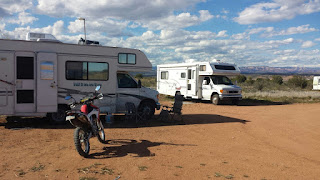 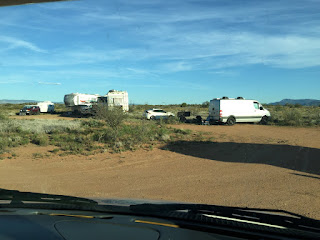 There was a big group of WIN RV Singles camped there and we joined several of the them around a campfire that evening. All in all, we met about eight members, and were encouraged to join their organization at least a couple dozen times. (We promised to think about it, but made no commitments.)

On Thursday, Dale and I rode his motorcycle up to Jerome and spent some time in the mining museum at Jerome State Historic Park and Douglas Mansion, and then wandered around the town for a while. I was surprised to discover that one of the Jerome family daughters was Winston Churchill's mother. We learned about how the topology of the town has changed due to the number of underground mine shafts and tunnels that collapsed  causing several large landslides over the years. Nowadays, they only do open pit mining in the area. The town's population has dwindled from ~15000 during the mining hay day to its current <1000 residents. 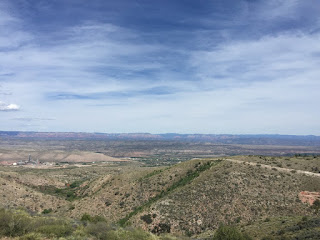 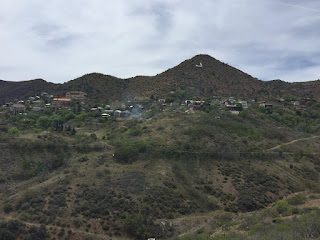 We stopped at Walmart on the way back, and when we came out, the motorcycle wouldn't start. After about a half dozen tries, it finally took hold and we made it back to camp. Whew! It would have been a long walk. (Dale thinks it's the fuel injection system, and he might have to go back to Phoenix to get it repaired.) 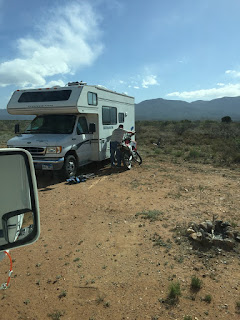 Strong winds blew all day Friday and we stayed inside most of the day, reading, watching TV and writing blog entries. 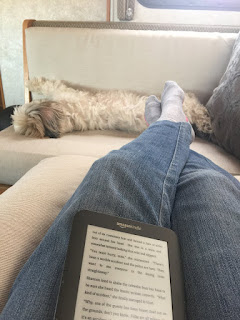 It felt colder overnight because of the wind, so I turned my thermostat up a couple degrees, and it kicked on four times in the night.

Richard and Dianna came by on Saturday from Blue Ridge Ranger Station campground on their way to Prescott for groceries. We all went into Cottonwood for lunch together, then they moved on up the road while I got ready to move back down the road ... toward home.

I pulled into Mesa about 4:00. It feels good to be home, but I'm looking forward to my next trip. Can't wait to take the boys on an overnighter!