My brother Dale made it back to town from his summer sojourn up north, so I wasted no time convincing him we should do a weekender in our Minnies. He suggested Roosevelt Lake because the weather would be nice up there in November.

Last Saturday morning we headed out. We took the northern loop, driving up the Beeline Highway toward Payson. I was in the lead for the first leg of the journey, but when I missed the turn off Highway 87 onto Highway 188 and had to U turn and come back, I let him lead the rest of the way to the campground. Good thing too, because I would have pulled into Cholla, and he was headed to Windy Hill. It's all about the AT&T cell signal, and Windy has more bars.

After setting up and taking Hanna for a walk, we hopped on his motorcycle and zipped up to the dam for a look around. 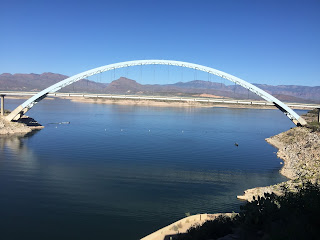 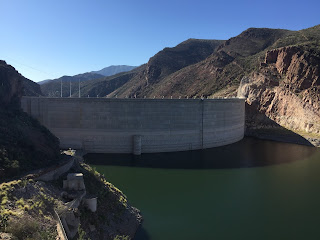 Very pretty! Then we went to Tonto Monument to tour the Visitor Center. We decided to climb up to the Lower Cliff Dwelling that afternoon. It was a very steep walk up a paved trail and we stopped a few times to catch our breath, but the view and ancient village were worth it. 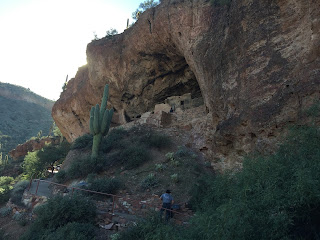 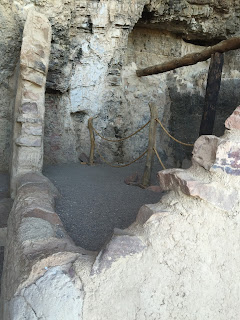 We made a reservation to join the guided tour to the Upper Cliff Dwelling on Sunday morning and then rode back to the campground. We sat outside in our chairs for a bit before starting supper, then I went into the motorhome to get something and found this: 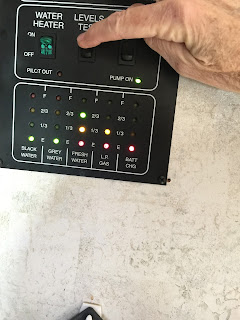 After just a couple of hours of sitting in camp, my coach batteries were dead! Fortunately, the engine battery was still fine, so I wasn't stranded. Well, my brother was there, so I guess I wouldn't have been stranded. But neither of us had jumper cables, so my Minnie might have been stranded if it wouldn't have started. Whew! We checked everything we could think of, and had a lengthy text conversation with my oldest brother Richard (who is also an RVer), and all we could deduce is the batteries had gone bad. Headlamp to the rescue!!

After sharing our supper and a movie in Dale's mini-Minnie (his is 24' compared to my 27'), I went home to get ready for bed by "candlelight". Okay, so it was really a flashlight, but it did feel slightly primitive.

As I did when I went to the Rim in September, I had taken my laptop and some DVDs and I went to bed to watch Gilmore Girls until I fell asleep. It was cold - down into the low 40s - but I had snuggly blankets. However, I did get worried about Hanna in the night (she doesn't sleep with me, but curled up on the chair), and I got up to cover her up. I had to command her to lie back down on the chair while I put blankets over her because she thought I was getting up to play. Silly girl! It was 1:30 in the morning!!

I went back to sleep knowing she was warm, and slept until 5:20. I swear, when I retire the first thing I'm planning to overcome is the habit of waking up at such horrific hours. Ugh! I couldn't fall back to sleep, so finally got up to make some coffee and oatmeal.

About 9:30, Dale and I rode his motorcycle back up to Tonto for our Ranger-guided tour to the Upper Dwelling. We had packed some snacks, sandwiches and water in a backpack, and we were ready for the trek. We had been informed it would take about 3 hours. There was a lot of climbing up a steep trail and lots of steps, but the ranger stopped several times along the way to point out interesting things or give us some history of what we were seeing. We did lose one guy along the way; he was slightly overweight and out of shape, and just couldn't keep up with the group. It was very interesting, and the higher we climbed, the prettier the views became. 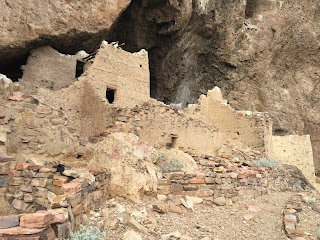 It had started to rain while we were in the ruins, so we nearly sprinted back down the mountain to get back to the campground before it started pouring.

It was time to head home, but I had one more new RVer initiation that needed to be done first. We drove back up to Cholla Campground where there is a free dump and I learned how to do that distasteful job. I'm happy to report it wasn't so bad, and everything came out fine in the end!

We took the southern route home, through Miami and Superior, and back into the city via US 60. It rained pretty steadily most of the way, but was a beautiful drive home.

Now to figure out what is wrong with my batteries.