To the Rim and back

I was awake on Saturday morning before 5:00 a.m. Can you say EXCITED for my first adventure? I decided to get up and get ready. I had turned the refrigerator on the night before and was relieved to find it was cold that morning. I loaded my food, secured most of the stuff inside, and waited a loooong 2 hours for Richard and Dianna to come meet me at our pre-arranged time.

The city had made recent “improvements” to the sidewalk in front of my house, and the boards I had used before to back into the road no longer worked, so we had to made a quick run to Home Depot for some 2x10 planks. That was just “barely” enough, but we got the Minnie into the road and headed to the gas station. After filling up, we were on the highway north by 10:15. 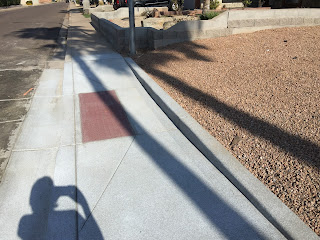 Richard rode with me and Dianna followed in their car. R taught me a couple neat tricks for handling the motor home on curvy mountain roads. For keeping centered in the lane on curves he said if I look at the outside of the curve instead of the inside (which seems to be more natural), I won’t stray so much in the lane. That means look toward the shoulder line on left curves and the lane line on right curves. It worked great, but requires some focus. The Minnie powered up most of the hills and soared down the other side with relative ease. R showed me the “overdrive off” button on the gear shift knob, which when engaged held the coach at a fairly even speed on a 7% downgrade, eliminating the need to ride or pump the brakes. Very handy!

We stopped at the Home Depot parking lot in Payson for lunch. My first food prepared in the kitchen was chicken salad sandwiches. I know ... not very exciting, but I did have real cooking plans for dinner.

We turned on Forest Road 141 and drove down for about 3/4 of a mile to where FR147A branched off. I found a nice space and maneuvered into a level area. We put out the rug, chair, awning, and Hanna’s tether, and then took a short walk up the road to stretch our legs from the ride. 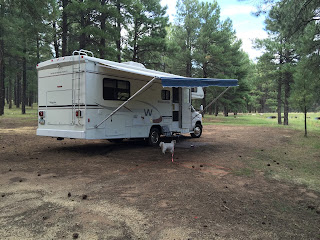 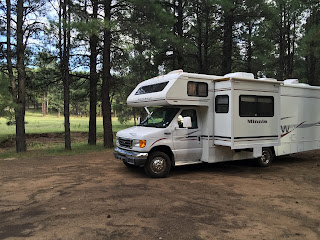 R & D sat and chatted for a while and then asked if I was ready to be on my own. I have to admit I had mixed feelings. I wanted them to leave so I could start my solo adventure; I wanted them to stay in case anything went wrong or I had more questions. But it really was time to be on my own, and after giving hugs and thank yous, I waved goodbye.

I read for a while, but Hanna and I were restless, so we took another longer walk. When we got back to our site, I was sitting outside reading and noticed some cows in the meadow making their way toward us. I said to Hanna, “Let’s go see the cows!”. As we got closer, I realized they were not cows -- they were bulls! We made our retreat before they saw us. 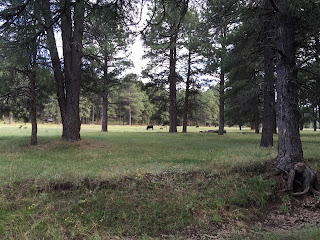 I was getting hungry, so I decided to make my dinner. The propane stove was so great (I have electric at home), and everything came together nicely.

We sat outside for a little while after dark, looking for stars, but it was too cloudy. We did see the beautiful full moon. 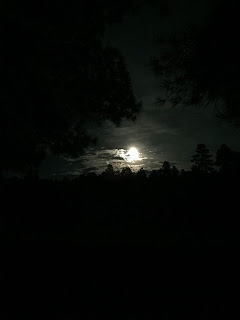 It was getting cold, so we went in for the night. I tried to read, but Hanna was very antsy, trying to figure out why we were not going home. So I turned off the lights and got in bed at 8:00 to watch a DVD on my laptop, and she finally settled down. She slept soundly until I got up to go potty at 5:00 and took her out to do the same. It was cold, so I got back into my warm snuggly bed for another hour and a half. Then my desire for coffee overrode my desire for my warm bed and I got up. When I opened the door to put Hanna out, I discovered it was warmer out than in, so I left the door open while I made my breakfast. 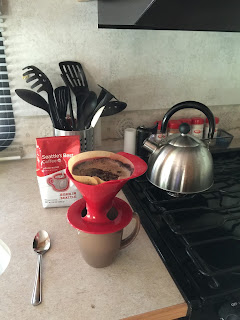 After cleaning up, we took another walk up a different road, finding different smells along the way. Hanna would not be able to investigate all the fascinating aromas up there if she sniffed full time from now until doomsday.

I had a headache, so went back inside and laid down for a bit, but felt like I was wasting my time in the woods, so I got back up and sat outside to read. About 11:00, the rigs up and down the roads began to pull out, and I felt like I was alone by 1:00. I decided to start packing up, pulling in the awning, putting away the chair and rug, securing everything inside, making my walk around and determining the best way to get out of my spot and back on the road. It took some maneuvering through the trees, but I managed to squeeze through and was headed down the mountain by 1:40.

Again, the Minnie handled well on the road and I pulled into Mesa at 4:10. It's hot, hot, HOT here and I'm ready for my next sojourn up to cooler country.

In summary, dispersed camping off a forest road was much different and much better than I expected. I was imagining very remote isolated closed-in areas, but it almost felt like a huge campground with great spread out camp spaces, plenty of room, no facilities, but a beautiful setting. I could just barely hear distant talking and see the campfire of my closest neighbors. If I had had an emergency, a loud shout from me would have summoned help, I have no doubt. I was able to get a Verizon signal on my iPad (my phone is ATT, which was useless there), so I could stay connected. That helped me feel much more confident ... and entertained, too! ;)

Want to know what I missed most from my luxuries at home? Nope, not TV. Surprisingly, it was my garbage disposal! It will take constant vigilance not to throw food scraps in my sink. I had to clean them out a couple times.

Next weekend is Labor Day, so I won't try to compete with holiday campers, but maybe in the next 2 or 3 weeks, I'll go out again.

(Note: A huge thanks to Richard and Dianna for taking me under their wing(s) and showing me the ropes this weekend. I don't know how I would have done this without your help. I certainly would have made a LOT of newbie mistakes. Mwaaahhh!)

Email ThisBlogThis!Share to TwitterShare to FacebookShare to Pinterest
Labels: Arizona Camping, On the road, Winnebago